The Forests of Adrimon takes place in a remote elven land dominated by immensely tall trees, crystal streams, and air so pure travelers have claimed they could cure diseases just by breathing it in.

The wood elves departed this land long ago, leaving behind their beautiful and pristine cities of silver. In their time, they cultivated the land so well that they opened portals into a new mirror realm, the land of the fey. For centuries our world mixed with fey-kind, and soon populations of new races began to spread far and wide. Sprites, korrigan, briarkin, and the elusive forestborn (stag-like centaurs whose fierce love of nature isn't matched) settled in the lands along with the humans and wood elves who already called it home.

Now however, for all its beauty, a terrible darkness lingers... The mind-wiped now rule this forest.

All who travel here begin to slowly lose their mind. The condition sets in almost immediately, and most fall under the Magi's control before the first week ends. This means the forest is largely devoid of those of sane mind, and would-be heroes struggle against Adrimon's terrible power, hoping desperately to face and defeat her. 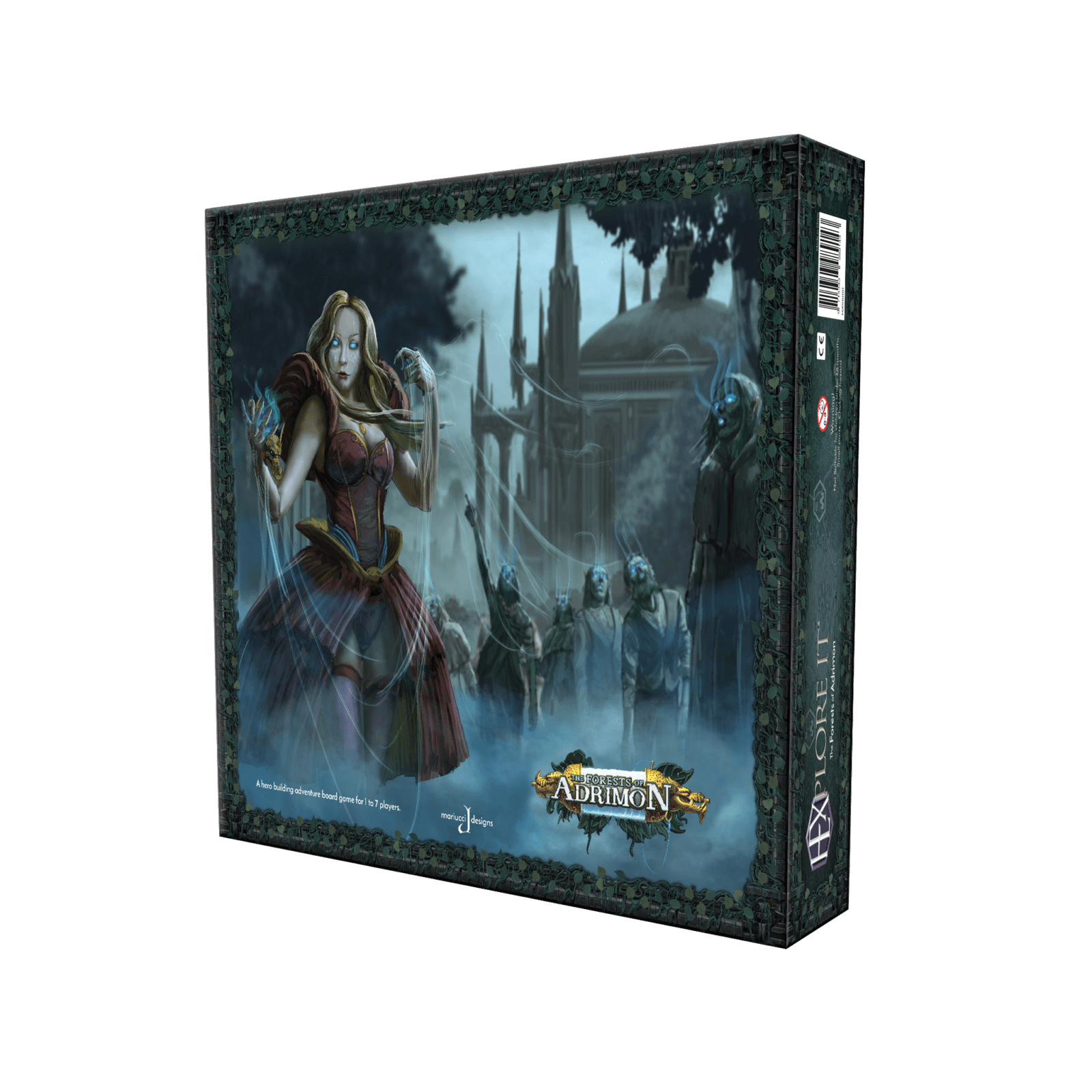 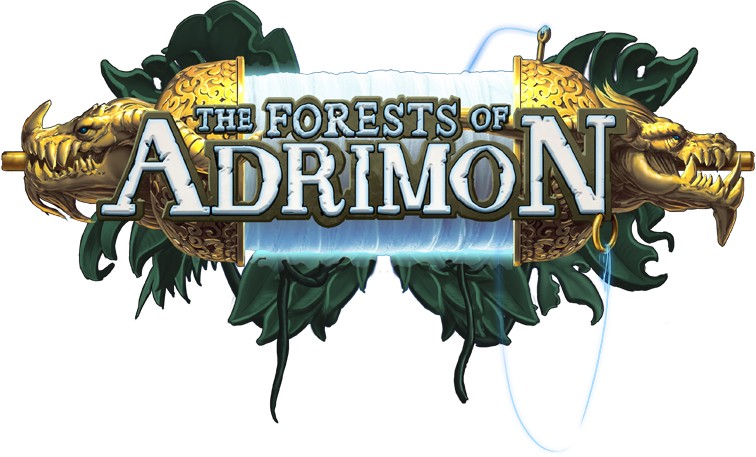 The Forests of Adrimon is a stand alone title that can be optionally played side-by-side along with the Valley of the Dead King. We're introducing new locations to visit, new bosses to vanquish, new treasures to find, and dozens of new items to acquire.

Gold is of much less value in the forest. Heroes will still acquire some, but the real currency is Nature's Essence. You'll have the option to try and gather items that are of much higher worth, called Nature's Essence. Below, you'll find the three items you can trade with Elowen the dyrad. In order from left to right are: Infused Seeds, Essence Vines, and Heart of the Forest.

Heroes can gather and trade Nature's Essence for other items in Elowen's grove. You'll be able to access the grove by entering the fey realm, or through Elowen's Keepers: powerful allies of the dryad, found in many parts of the forest.

There have been many heroes who have tried facing the Magi and failed. When they were destroyed, Adrimon shattered their equipment and scattered fragments far and wide.

In the Forests of Adrimon, our heroes will attempt to find these fragments, in order to piece together powerful relics. If they can piece all fragments together, they can return to the spirit of the hero who once possessed it, in order to reforge and reuse against Adrimon.

Six relics are shown below, and will be obtainable by the heroes. When found and forged, each boosts a single heroes' attribute, offers a one-time per battle use, and shuts down an ability the Magi uses against the heroes!

The Relics: What are they?

Six heroes faced Adrimon in what would later become four sacred Battle Sites. Just before they perished, these heroes did something different than the others who faced Adrimon. They sacrificed themselves using powerful emotion-driven magic which infused pieces of their equipment with their very essence.

Each of the six items became Relics, and in an effort to destroy them, the Magi shattered them into pieces and sent them scattering far and wide within the forest.

The Relic fragments have been lost for some time, and now the Forest has begun to grow around their magic. If the heroes could find them and return to the Battle Sites, they just might be able to reforge them.

The six relics are:

It is rumored that the six heroes who faced the Magi weren't the only ones to attempt to and perish. There may be additional Relic fragments lost to the Forest. None know for sure, but the rumors still exist...

There are several different types of locations found in the Forests of Adrimon.

From ancient Battle Sites to Enthralled Cities filled with Adrimon's mind-wiped, Wayposts and even lairs for powerful Bosses. The heroes will be able to visit each of these locations in order to gain more power to eventually face the Magi.

Players who are familiar with the Valley of the Dead King will be familiar with the Circumstance deck. Like our first title, this deck of cards will contain dozens of cards. You'll find Afflictions, Nature cards, Discoveries, and lots of unique Encounters, not to mention a smattering of Treasure cards! 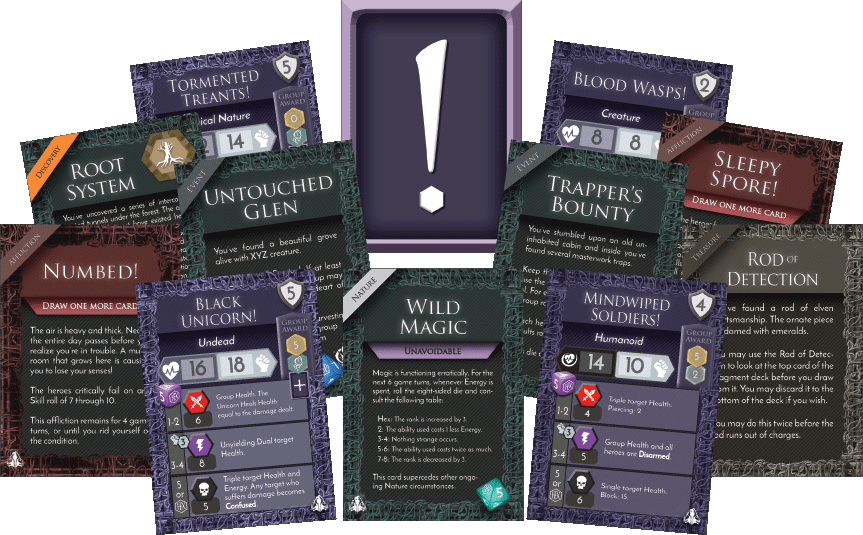 Some opponents may be saved from the Magi’s mind control. During battle, you may choose to either damage them or try to save them (or even both).

The Magi has tied the souls of many unfortunate beings to herself and those she wishes to protect, creating a Soul Shield around them.

Some opponents may even Soul Lace the heroes, which allows the opponent to gain or heal their own shield. Be careful, as those who are Soul Laced suffer the damage dealt to the Shield. 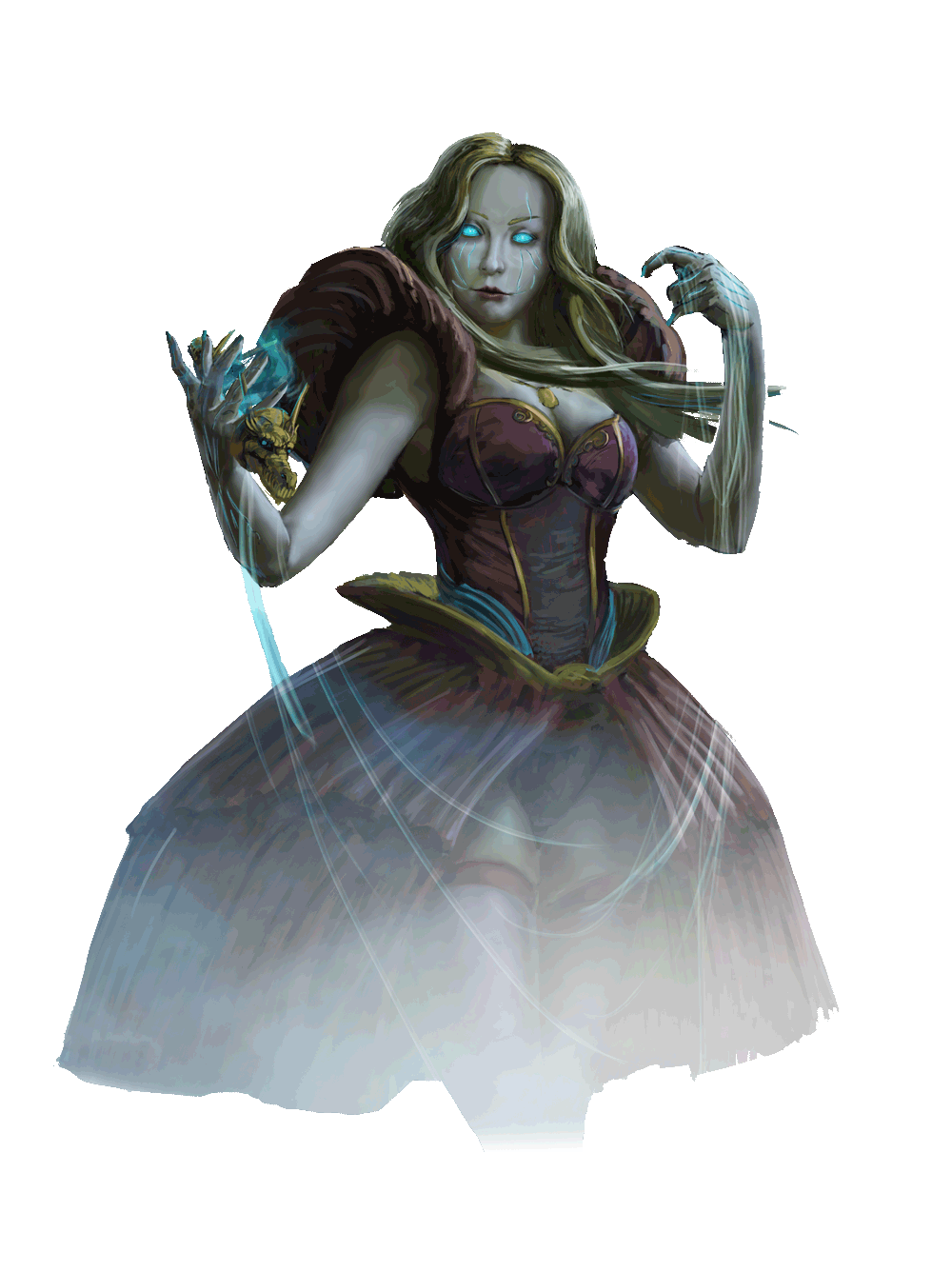 No one knows much about this enigmatic sorceress. She is said to have come from another realm, and she was revered as a goddess for a short time before the people of the forest inevitably and one-by-one, lost their minds. There are accounts that say she is a beautiful goddess, and others that mention she closely looks more like an automaton. Those who see her as a goddess fall to her power quickly.

Oddly enough, those who see her for what she is are somewhat resistant to her powers, outlasting those who would fall to her power. Unfortunately this resistance is only temporary, as only Elowen's Keepers have been able to overcome her terrible power completely.

Entire cities of her mind-wiped now are forced to live a puppet's life, one driven by her need to tear down the cities and create her monstrous automatons- the Sentinels.

Adrimon resides in her Acropolis, which her cult of followers has built around one of the five elven cities. She never leaves it, instead watching over her forest in silence. The heroes will travel to her acropolis to initiate the final battle with her.

The Magi has been balanced in such a way that her abilities are brutal to heroes who face her without the help of Relics. While possible, geared up heroes facing her on the Starter difficulty will find the fight feeling like an epic one. We purposefully created her abilities so that this play style was available to the heroes, should they want to try it.

During the final battle, each of her six abilities are tied to one of the Relics. As the players build them, they'll be diminishing her power. For instance, the Shield weakens her Attack ability. Typical games will see the players building 2-3 relics, depending a little on their skill at navigating the board and their luck avoiding obstacles.

The Fate Tracker is located on the Battlemat in the upper left corner of the card. It is the mechanism that acts as the game's timer. Players will keep track of game turns, counting up to 6 for each cycle.

This image shows the Fate Tracker (outer ring of numbers) and the Fate Cycle (the inner gray hexagon). Each game turn, players will record a small dot in the outer ring. When the sixth is recorded, the number inside the hexagon (Fate Cycle) will increase by 1.

If the Fate Cycle (the number inside the hexagon) is ever equal to or higher than any hero's skill rank, that hero automatically Critically Fails when required to roll that skill (no roll is made). A hero may roll their skill again if they manage to increase their rank higher than the Fate Cycle.

If the Fate Cycle is ever equal to or greater than all skills of a hero, the hero becomes Mindwiped.

Mindwiped heroes may no longer participate in combat, and are treated as dead for purposes of awards they would receive (incoming gold and food is given to the other heroes, and power up cards are taken, but set aside until they shrug off the Mindwiped condition).

During the Magi phase of each Game Turn, the group moves 1 hex towards the nearest Enthralled City for each Mindwiped member of the group. If the group would end their Game Turn on an Enthralled City, they stop 1 hex away from it and all Mindwiped heroes are forever lost and removed from the game. If all heroes become Mindwiped, the players lose the game.

The Importance of Skills

Skill ranks are coveted beyond all other stats in the Forests of Adrimon. Over the course of all of our playtests, we've felt the rush of being on the cusp of losing our Skill rolls only to have them brought back up in the nick of time. There are several ways to increase your hero's skills. Here are a few: